Parull Chaudhry recently attended Mrs. India Queen Beauty Pageant as the Brand Ambassador in Goa. The Bhagya Lakshmi actor shares having a good time at the pageant that saw the participation of women from different walks of life.

“It was a magical event, with so many talented people around. Goa, as you know, gives you the happy vibe, and when you attend such a great event, that too as the Brand Ambassador, you know that you’re passing on that vibe and energy to every participant who had their own struggles, stories, to achieve so much in life and take the stage… I would like to congratulate Shweta Roy who’s the brain behind this pageant,” she says.

Parull feels beauty pageants are important because a lot of times, a lot of girls, women have a lot of dreams that lie unfulfilled. “Especially when it’s getting a stage like this and getting recognized or winning a pageant or even participating in it. I think it’s a big deal. It kind of boosts your confidence, gives you a new identity. Even Mrs. India Queen’s official tagline was ‘Pehchan Meri’,” she adds.

About her idea of beauty, the actor explains, “I might sound cliché but beauty according to me lies within us. However beautiful you’re on the outside if you’re a bad person within everything kind of just crumbles down. So it is very important that you’re a good human being, give out positive vibes. You remember a person for their goodness, which is their beauty, not just how they look.”

A lot of Beauty Pageants keep happening throughout the year, the reason why it has kind of lost its charm. “I still remember when I had started modeling, beauty pageants used to be so popular. Now at every corner of this world, there are pageants happening so you get really confused about where you should participate or where you shouldn’t. So when I was approached for Mrs India Queen, I met Shweta Roy and the core team and understood that their vision was big. I knew that she really wanted to bring a change in the lives of married women and this thought came to her mind during lockdown when women went through a lot… The kind of women I met and interacted with during the pageant were superwomen. They had their own stories and were happy to be a part of the competition,” she adds.

Parull also shares that the pageant was a different experience given the current pandemic times. “We had time and guest restrictions. There were no open tickets, so it was a very private event. There were not many guests. Only the families of the contestants and the core team were present. It was not one of the paid events where anyone could buy a ticket. It happened in Holiday Inn Resort, Goa,” she says. 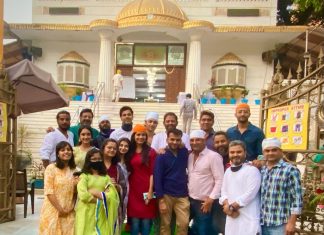 Shahzad Khan - March 16, 2022
0
We know Rajan Shahi before the launch of every project has performed a puja on set. In preparation for Star Bharat's Woh Toh Hai...

Sanjay Kohli: Comedy will never go out of fashion