A man-mountain who has been elevated to second choice in the absence of the injured Jack Butland. Excellent for Southampton now he has recovered from a lengthy knee injury, he was unused at the 2014 World Cup but has proved reliable when called upon.

Eight years after his debut, the Manchester City goalkeeper is clearly established as England’s first-choice. Did not feature at the 2010 World Cup but started the next two major tournaments and nine of England’s Euro 2016 qualifiers. Strong, authoritative and a reassuring presence. 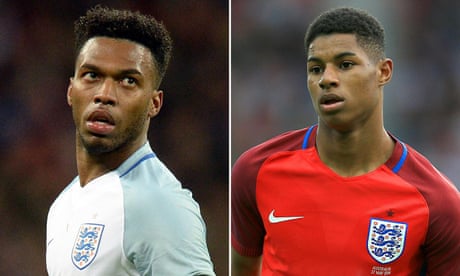 The much-travelled goalkeeper has been a regular in Roy Hodgson’s squad as third choice over the past 18 months despite spending the season in the Championship with Burnley.

Made his senior debut in a friendly win against Italy in Switzerland immediately after Euro 2012 but has flourished more regularly recently after excelling for Southampton. His senior England career has been limited to two competitive matches but he is well placed to compete for a starting place at left-back in France.

Hodgson’s vice-captain and a regular under this manager, he will hope to make up for missing out on Euro 2012 after breaking his jaw in a friendly against Belgium just before the tournament. The Chelsea centre-half has captained the team on occasion – not least in the victory in Germany in March – and is a rugged performer, despite struggling at times to hold down his position at club level this season.

Quick and aggressive down the flank, the Liverpool player appears to have convinced Hodgson he should be considered England’s first-choice right-back. He can operate at left-back if required, which adds to his attraction, but his first major tournament will be a proper examination of his development after a testing first year as a Liverpool player.

The left-back has made regular appearances in England squads and, after a fine season at Tottenham Hotspur, got his debut in Berlin in March, with an impressive display against the reigning world champions. Diminutive, quick and attack-minded, his delivery is a considerable asset.

A Hodgson favourite from his days as Fulham manager, the former Maidstone defender has become a mainstay of the backline in recent times, bringing encouraging club form on to the international stage. Played against Costa Rica in Belo Horizonte but will go into these finals as a first-choice centre-back.

Such a classy performer on the ball, though prone to over-elaboration in unwise positions, as demonstrated against Holland in March. Hodgson has long earmarked him as the future of the national team at centre-half, though Stones’ appearances have more usually been at right-back. The manager even discussed using him as a defensive midfielder last autumn.

Named in Uefa’s team of the tournament at the 2011 European Under-21 Championship, he made his senior debut in a friendly victory over Spain later that year. A toe injury kept him out of Euro 2012 but he has been regularly involved in the period since and has enjoyed a fine campaign at Tottenham.

Was promoted into the England senior side as a teenager last autumn and has not looked back, quickly establishing himself as a key, energetic member of Hodgson’s team. He can operate as a No10 or in one of the wide positions of a midfield three, and provides forward thrust and energy. Scored his first senior goal against France and was outstanding in the win in Germany.

Criticised at times by Hodgson for surrendering possession in dangerous areas, Barkley remains one of English football’s great hopes. Featured at the World Cup two years ago and was the team’s attacking inspiration through the autumn, operating more successfully as a central playmaker. Strong, clever in his delivery and a goal threat.

One of the many revelations of Tottenham’s season, the player schooled in Portugal at Sporting has switched from centre-half-cum-right-back to defensive midfielder and excelled. He was impressive against France at Wembley in November, and scored the stoppage time winner to beat Germany in Berlin in March. Solid, dependable and clever with his positioning.

Liverpool’s captain has not enjoyed his best season but he remains a mainstay of Hodgson’s midfield, having made his international debut six years ago. Replaced the injured Frank Lampard at Euro 2012 and started in Manaus and São Paulo two years later, England have tapped into his energy and delivery from set plays.

A clever player capable of operating wide in a front three, or tighter in a midfield diamond. He must start contributing regular goals for England to justify regular inclusion, but Hodgson has leant upon him as a reliable, selfless and industrious creator.

England’s Mr Reliable over seven years. Only Rooney boasts more caps in this squad, with Milner having featured in three major tournaments. The Liverpool player can operate across midfield, even as a deep-lying anchor, and at right-back, but has suggested Euro 2016 may be his last involvement with the national side.

There was good news for Marcus Rashford, Daniel Sturridge and Joe Ledley and bad news for Danny Drinkwater, Andros Townsend and Marco Reus among others as the final Euro 2016 squads were named
Read more

First capped as an 18-year-old by Fabio Capello, Wilshere has been utilised by Hodgson at the base of midfield as a calm distributor of possession rather than a fierce tackler. He has thrived in the position and, when required, bursts forward to assist the attack, scoring a brace against Slovenia last summer to confirm his potential. Injuries have limited his involvement ever since.

Scored on debut 80 seconds after his introduction as a substitute against Lithuania in a European qualifier in March 2015, and now England’s most obvious No9 selection after prolific form with Tottenham. A regular in England’s junior ranks but would have qualified for Republic of Ireland through his father.

England’s captain and record goalscorer, with 52. Burst on to the international scene at Euro 2004 but has endured frustration at virtually every major tournament since, from dismal form, a lack of fitness or an untimely red card. This may be his last opportunity to excel on the international stage.

Only the fifth Englishman to be capped before his 18th birthday, Sterling was called up by Hodgson after Euro 2012 and his performance against Italy in Manaus was arguably the highlight of the team’s World Cup campaign in 2014. Has been used wide right but also at the tip of a midfield diamond, where he revelled in the World Cup .

Represented Great Britain at the 2012 Olympics and, having graduated through the junior levels, made his senior debut under Capello. One of the brighter attacking performers at the 2014 World Cup and, when fit, a key member of Hodgson’s front-line options.

Hodgson was impressed with Vardy’s raw ability, energy and industry, through Leicester’s relegation fight in 2014-15 and offered the striker a debut in Dublin last summer. Scored his first international goals against Germany and Holland in March, and can operate wide or through the middle.

Became youngest England player to score on his England debut after putting England 1-0 up against Australia after three minutes. The teenager has demanded inclusion with his performances since breaking into United’s first team amid an injury crisis in late February. He scored twice that evening, against Midtjylland, and has seven goals in 16 club games. Has not won an England Under-21 cap yet and has a sole Under-20 appearance.